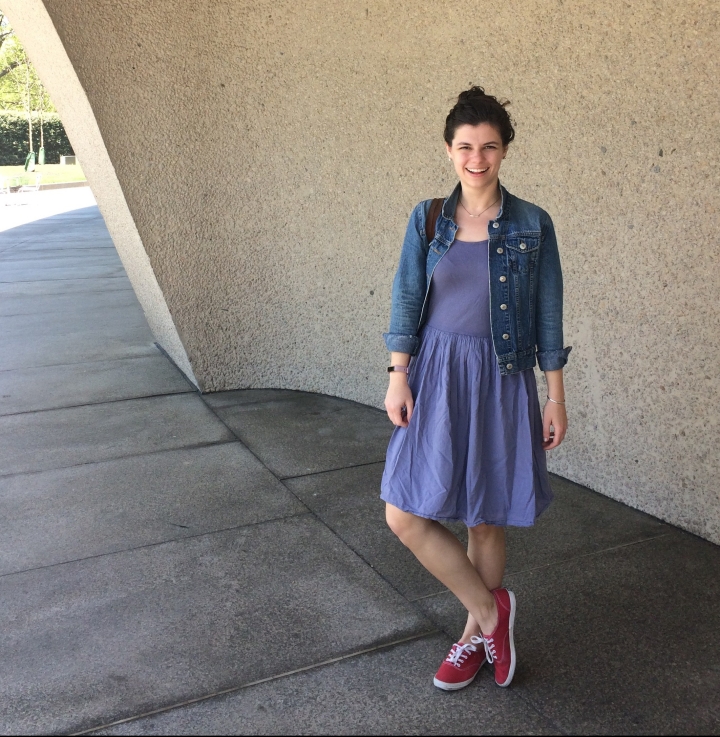 After going months without accomplishing any bucket list items, I visited two places, the Hirshhorn Museum and Eastern Market, in one sunny Saturday! My good friend from college was in town for an event at the Hirshhorn, and we explored DC together afterwards. The lure of art, time to catch up with a friend from college, and brunch was enough to entice me onto the metro.

Since my friend got in late Friday night, we gabbed until midnight, catching up and talking about how mutual friends were doing. In the morning, she headed to the museum early and I went for a quick run, planning to meet her in DC after the art conservation talk ended. Post-run, I spent a solid ten minutes dithering about what I would wear, since I needed a cool, urban outfit that would keep me from getting totally sunburned while we walked around the city. I settled on this sweet dress, which has a scoop-neck, short-sleeved jersey top and a full cotton skirt that ends just at the knee, paired with a denim jacket (for sun protection, not warmth), Keds, and a topknot. I threw my essentials and a book for the metro in an enormous leather tote and headed into the city.

I got off the metro and ambled over to the Hirshhorn, winding my way through the blooming gardens of the other Smithsonian museums. I quickly became disoriented and asked a security guard where “the museum” was to have him laugh and say “Which museum? There are 19 Smithsonians.” I finally arrived at the Hirshhorn, recognizing the distinct round building and the fifty-foot abstract sculpture out front.

I spotted my friend immediately in the lobby with the group from the event and joined them for a chat about the conservation of one of the exhibits, a smashed car underneath a boulder that I had seen outside. I tried to keep up with the discussion of conservation, artists, and different museums. The treatment of the car-boulder was particularly interesting: the exhibit is outside, so some deterioration is natural, but the conservators had to keep pieces from detaching.

Afterwards, we walked around the sculpture garden admiring the other exhibits, which were mostly made of metal and therefore not as difficult to conserve as the car-boulder combination. My friend knew lots of fun facts about the sculptors, how the museum acquired the different sculptures, and how they were conserved. I settled on a favorite, these figures that looked like fighting Weebles spread out across a lawn.

We planned to meet a third friend for brunch at Betsy, a cafe near Eastern Market with a huge menu of gin and tonics. The sidewalks in the Eastern Market neighborhood were packed with Restaurant Day participants, buskers, and groups of fundraising students, but we managed to rendezvous with our third friend and find Betsy, a cute spot with tables crammed on a second floor terrace above its sister restaurant, Belga’s. The three of us snagged the last available table and enjoyed fabulous brunch cocktails and omelets.

After brunch, we walked around the neighborhood a bit and ended up at Eastern Market, which was only a few blocks away. The whole street was closed off for vendors selling everything from art to produce, and nearby stores had brought their wares outside as well. The atmosphere was that of an eclectic farmer’s market, and I was surprised how many farmers were there selling produce. We wandered around, checking out the beeswax soap and leather bags and potted plants for sale, then headed back to the metro so my friend could catch her train home. I went home a little sunburned and thrilled with how the day had turned out.

What are the other must-see museums? What do you wear for exploring in a fun city? Which bucket list item should I tackle next? Let me know in the comments!

3 thoughts on “DC Bucket List Items #4 and #5: The Hirshhorn Museum and Eastern Market”